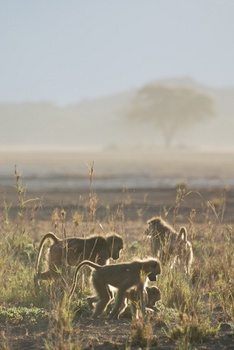 Catherine Markham and collaborators recently found that baboon social groups benefit from a home field advantage when competing with their neighbors.  The paper was published in Animal Behaviour in August 2012, and used 9 years of behavioral data collected on 5 baboon social groups in Amboseli that have highly overlapping home ranges.  When direct conflict occurred between neighboring baboon groups, the winning group was predicted by both differences in the number of adult males in each group and long-term patterns of space use.

Groups had a competitive advantage if they had relatively more males and/or had used the area surrounding the encounter location more intensively than their opponent in the preceding 9 or 12 months.  By contrast, relative intensity of space use over shorter timescales (3 and 6 months) was a poor predictor of the interaction’s outcome.  Only losing groups experienced clear short-term costs in the aftermath of conflict: losing groups, but not winning groups, decreased their use of the area surrounding the interaction following an agonistic encounter. These findings offer new insight into the influences and consequences of intergroup competition on group-level patterns of space use.