In a recent article published in the Proceedings of the Royal Society B, we showed that both feticide and infanticide occur in Amboseli following the immigration of especially aggressive males—a behavior that is more common during periods of limited reproductive opportunities and low resources. This represents the first population-wide analysis of feticide in a wild population. Sexually selected infanticide— the killing of infants by adult males—has been widely documented in primates and other taxa. Infanticide is believed to be adaptive because females whose infants are killed becoming sexually receptive sooner than they would if they had instead continued to nurse their infant. Males are then able to mate with those infants’ mothers sooner than they otherwise would. The same benefits should be attained by males who are able to kill fetuses in pregnant females, but analysis of possible feticide is difficult in most wild populations because assigning precise start and end dates of pregnancy is often not possible. Using our extensive database, which includes dates of conception and miscarriage and dates of male immigrations, we were able to determine that rates of fetal and infant death increase dramatically during the two weeks immediately following the immigration of highly aggressive males. This evidence strongly suggests the occurrence of feticidal and infanticidal behavior by these males. By examining which immigrations were followed by multiple fetal and infant deaths, we determined that feticide and infanticide were more likely to occur when many potential targets (fetuses and infants) were present and during periods of relatively low resource availability, when dispersal was relatively costly. In other words, feticidal and infanticidal behaviors by males are far more common under particular environmental conditions. 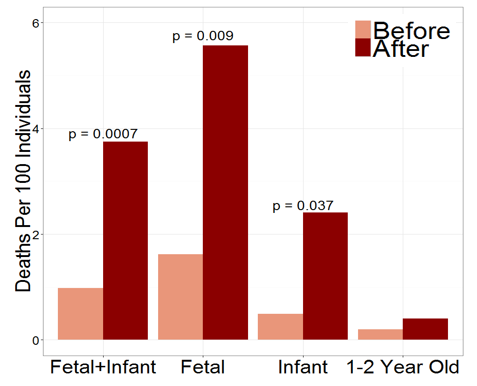