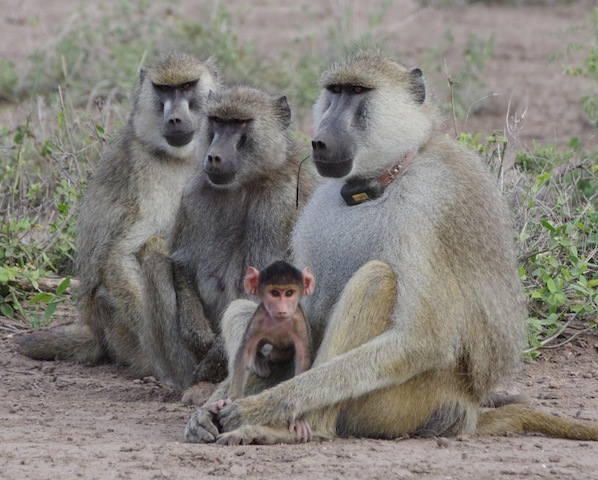 In humans and other animals, harsh circumstances in early life are linked to poor health and high mortality rates in adulthood. It is thought that these effects are greatest when multiple adverse conditions occur at the same, but this hypothesis has rarely been tested. We used prospective data on 196 wild female baboons in Amboseli to show that the number of adverse circumstances that a female experiences during her juvenile years predicts how long she lives as an adult. Specifically, we examined the effects of six different adverse circumstances: (i) being born in a drought, (ii) having a low ranking mother, (iii) having a socially isolated mother, (iv) having your mother die before you reach 4 years of age (the approximate age at sexual maturity for females), (v) having a younger sibling born when you yourself are still quite young (1.5 years of age or less), and (vi) living a very large social group. Females who experience 3 or more of these adverse circumstances tend to die 10 years earlier than females who experience no adverse circumstances. For comparison, the average female, once she reaches adulthood, lives to about 18.5 years of age, so 10 years is a very large difference in the life of a female baboon.

For instance, compare compare a ‘silver spoon’ female, Kelly, with a very disadvantaged one, Puma. Kelly’s mom, Kupima, was only middle-ranking, but Kelly’s family was intact: both her mother Kupima and grandmother Kupita were present into Kelly’s adulthood, and she had plenty of aunts and uncles and a big brother as well (but no sisters). The ‘K’ family tended to engage in a lot of grooming with each other, producing close social bonds. Kelly also had a full two years alone with her mother before her brother Ken was born. Kelly lived to 26.5 years, one of our oldest females on record. In contrast, Puma was born to a low-ranking, socially isolated mother, Penny, who died just a month before Puma’s 2nd birthday, long before Puma reached adulthood. In contrast to Kelly, Puma died at the age of 7, killed and eaten by a leopard.

We also found that females who experience the most adversity in early life are also socially isolated from other females in adulthood, suggesting that social processes in adulthood may partially explain the link between early adversity and adult survival. Our results provide powerful evidence for the developmental origins of health and disease and indicate that close ties between early adversity and survival arise even in the absence of health habit and health care-related explanations.