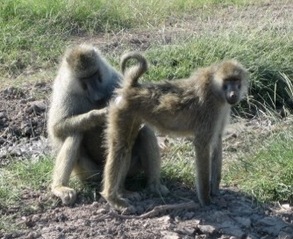 Finding a mate can be complicated, especially when the process is colored by differences in social status, preferences, and relationship histories. Such is life, though, for baboons living together on the East African savannah—and, in a recent American Naturalist publication, ABRP researchers Jenny Tung, Susan Alberts, Jeanne Altmann, and colleagues have now shown that genetic make-up also contributes to the mix.


To do so, they sifted through almost three decades of research on wild baboons from the Amboseli basin of Kenya. Because these animals were watched almost every day during this time, they were able to consider the social status, age, and potential mates for each baboon in their study. For males, high social status was a big factor in who mated the most, while for females, high fertility was more important. However, genetics also played a surprisingly strong role. Males who genetically resembled anubis baboons—a type of baboon that has only recently appeared in the Amboseli basin, where mostly yellow baboons live—were more successful at winning mates. At the same time, pairs were more likely to mate if they were both anubis-like or both yellow-like.


This study emphasizes the complexity of finding a mate in social animals like baboons, where simple scent or color cues aren’t enough. The results indicate the importance of behavioral plasticity and context-dependence in baboon mating behavior. These kinds of effects are important because they help determine which individuals pass on genes to the next generation, what those genes will look like, and whether the two types of baboons (anubis and yellow) are likely to merge or become more genetically distinct down the road.