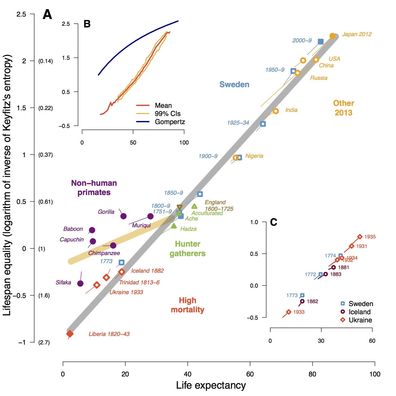 Public interest in social and economic equality is burgeoning. In a recent paper in PNAS that examines both nonhuman primates and humans, we measured a related phenomenon, lifespan equality – a measure of whether lifespans in a population tend to vary a lot or be similar to each other. We used data from six well-studied primate populations – our own Amboseli baboon population, and also mountain gorillas in Rwanda, chimpanzees in Gombe Stream National Park in Tanzania, sifaka in Beza Mahafaly in Madagascar, muriqui monkeys in the RPPN Feliciano Miguel Abdala in Brazil, and capuchin monkeys in Santa Rosa National Park, Costa Rica. We combined these data with data from more than 20 human populations in diverse circumstances to reveal four key findings. First, in both life expectancy and lifespan equality, industrial humans differ more from non-industrial humans than non-industrial humans do from other primates. Second, lifespan equality rises in lockstep with life expectancy, across primate species separated by millions of years of evolution and over hundreds of years of human social progress. Specifically, two straight lines describe the joint rise of life expectancy and lifespan equality: one for primates; the second over the full range of human experience from average lifespans as low as 2 years during mortality crises to more than 87 years for Japanese women today (see Figure). Third, in spite of the astonishing progress humans have made in lengthening the lifespan, a male disadvantage in lifespan measures has remained substantial. That is, across the primate order and across human populations, the lives of females tend to be longer and less variable than the lives of males, suggesting deep evolutionary roots to the male disadvantage. Taken as a whole, our results reveal in greater detail than ever before, the long evolutionary and historical path traversed by the human lifespan, from short-lived primate ancestors to longevity frontrunners in 21st c Japan and Sweden. The conquest of early death through collective human efforts to avert mortality from disease and accidents has yielded lifespans that are both longer and more equal in modern industrial humans than at any other time or in any other species in the primate order. The extraordinary sociality of humans may both contribute to and be enhanced by the parallel rise of life expectancy and lifespan equality. In spite of advances in lifespan, the lingering male-female differences in life expectancy and lifespan equality raise questions about the nature and extent of sex differences in how individuals survive hardship and illness and respond to socially-mediated resources, opportunities and risks, questions that remain largely unanswered.

Figure. The continuum of lifespan equality and life expectancy in primates. In all three panels, the y-axis shows our measure of lifespan equality, the log of the inverse of Keyfitz’s entropy; corresponding values of Keyftiz’s entropy are given in parentheses in Fig. 4A. (A) The evolutionary-historical continuum in lifespan equality and life expectancy for the 6 nonhuman primate populations and 22 human populations. The yellow regression line shows the relationship for nonhuman primates; the gray line for humans. (B) Th.e continuum for 8,198 human life tables. The blue curved line describes the relationship between lifespan equality and life expectancy if mortality follows Gompertz’ law, i.e., if the risk of death rises exponentially, increasing 14%/year. Because of the paucity of observations, the 99% confidence intervals (CIs) are not shown for life expectancies below 35 or over 85. (C) The continuum for three short-term crisis populations when mortality sharply rose and then sharply declined from year to year. In A and C, data for female-male pairs from each population are indicated by a point with a ‘tail’; the point represents female values, with male values at the end of the tail.