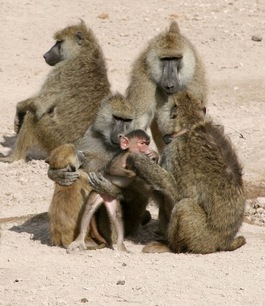 A baboon’s social life can have a powerful impact on how successful he or she is in life. We know from previous studies in Amboseli, for instance, that social status, social bonds, and social competition can be important in predicting health, survival, and reproductive success. Now, recent work by Dan Runcie and ABRP investigators has found that a baboon’s social environment can also influence how genetic differences affect gene expression, suggesting that gene regulation in Amboseli may often be subject to so-called gene-environment interactions. Social variables like dominance rank, group size, and social connectedness (a measure of relationship quality and quantity) all had the potential to interact with genotype to influence gene expression in at least one sex. Consistent with previous studies, we found that early life social environment often mattered even when measuring gene expression phenotypes in adult baboons, although adult social environments were important as well. Based on these data, which were published as part of a special issue of Philosophical Transactions of the Royal Society, we conclude that social environment-mediated GEIs could be important in shaping the evolution and maintenance of trait variation in wild baboons and other social mammals.