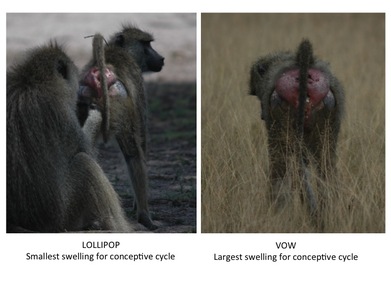 Although the exaggerated traits in males of many species captured the attention of the very first evolutionary biologists, exaggerated signals of fertility in female animals have been only recently recognized as common. One of the most conspicuous of all the exaggerated signals of fertility is the large estrous swellings displayed by female baboons and several other species of Old World primates. Indeed, they have attracted great research interest in recent decades. In particular, biologists often hypothesize that the size of a female’s swelling may contain meaningful information for males. Previous decades of research have shown that, in baboons, the changes in swelling size within each sexual cycle correspond to probability of ovulation; they appear in the early follicular phase, increase in size until late follicular, and decrease in size during the luteal phase. However, what additional information might swelling size reveal? This question has remained open. We collected the largest data set on swelling size measures in the wild and paired it with additional longitudinal data to ask whether ecology and individual features of a female predicted swelling size.

The reproductive biology of female baboons is similar to that of human females; females cycle throughout the year and—although cycling female baboons never go unmated—they almost always cycle several times before they finally conceive. Because of this unique feature of primate reproduction, there are three types of variation in swelling size. First, we know that swelling size changes within each cycle. Second, swelling size may vary in size within a given female, changing in size from one cycle to the next. Finally, swellings may vary in size between individuals. That is, some females may be “large swelling females” while other females might be “small swelling females.”

We looked at the relationship between four potential predictors (female age, female dominance rank, the number of times a female had cycled since her most recent pregnancy (“cycles since resumption”), rainfall) and the swelling size achieved by a female. Cycles since resumption had an unambiguous effect on swelling size and this study provides the strongest evidence to date that, within a given female, maximal swelling size increases with each consecutive cycle. This relationship was especially true during periods of heavy rainfall and not detectable during a period of severe drought. Furthermore, average swelling size was smaller during the period of severe drought than during the period of abundance that resulted from heavy rains. Finally, maximal swelling size tended to increase as females moved from early to middle reproductive years, corresponding to an increase in fertility from early to middle reproductive years that has previously been demonstrated in this population. These results tell us that swellings do indeed have the potential to signal important information to males about differences in female fertility, whether those differences are due to changes in fertility between pregnancies, due to access (or lack of access) to resources, or due to age-related changes in fertility.

Now we know that variation in swelling size at least has the potential to signal important biological information to male baboons. The next question is, what aspects of swelling type do those males actually attend to? That is currently the subject of a subsequent analysis.