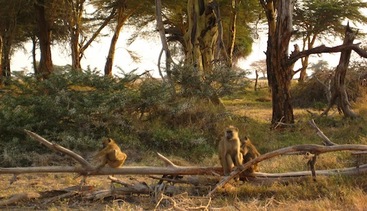 For humans, of course, this is unimaginable. In most human societies, even the closest family separates during the day to their various jobs and schools, and kids grow up and form their own families in their own homes. Baboons, however, live their entire lives in close and continuous proximity not only to friends and family but also to opponents. For a male, who may live in several different groups over the course of his life, the situation is not so acute. But for females, relationships with other females truly persist "until death do us part," and so it is not surprising that females take rather great care in choosing and maintaining friendships. 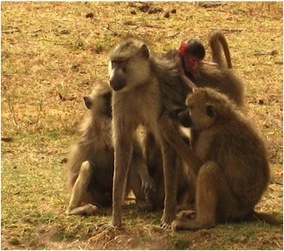 When a female baboon reaches adulthood, she typically ranks just below her mother in the adult dominance hierarchy of the group. The pattern of rank inheritance results in rather stable dominance relationships among families that may persist even across many generations [49, 83].

The mother's dominance rank has a powerful effect not just on her daughter's adult rank but on the rank that the daughter attains among other juvenile females [73, 93, 102, 40]. A juvenile female usually ranks above the daughters of females that her mother ranks above, and below the daughters of females that her mother ranks below, and this is largely independent of their age and size. In contrast, dominance rank for juvenile males is much more dependent on age and size; males dominate everyone smaller than they are, regardless of their maternal dominance rank.

Of course, baboons are highly individualistic and flexible animals, so that these rules don't universally apply. Some females target females that "should be" much higher ranking than themselves, and work hard (and sometimes successfully) to attain a higher rank than their mother attained. Some males fail to dominate males that are smaller than themselves. But in general, the ranks of female juveniles depend more on their mother's ranks, while the ranks of male juveniles depend more on their own size and fighting ability.

Female rank and quality of life. During adulthood, dominance rank has different consequences for males and for females. For females, the effects of rank are subtle but pervasive. High ranking females can displace lower ranking females from food and water sources, can push them away and take their place in grooming episodes, and generally enjoy much more freedom to go where they want to go and do what they want to do within the group. These differences between high and low ranking animals affect feeding behavior [39], and the rate at which their offspring grow and the age at which they reach maturity [125, 91]. 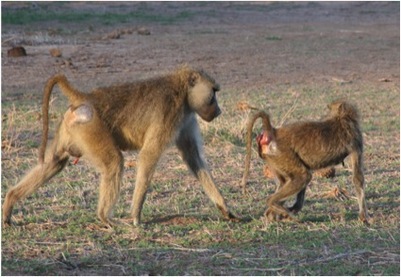 Male rank and mating success. For a male, the effects of rank are less subtle and have pretty direct consequences for how many offspring he leaves behind. This is because high-ranking males manage to form sexual consortships with females more successfully than low-ranking males do (see our page on life histories for a description of consortships). During some periods of time, high-ranking males enjoy a very great advantage in obtaining consortships [128, 13], and this puts a great premium on being able to attain and maintain high rank. During other periods of time, lower-ranking males obtain more mating opportunities by forming coalitions with other males that succeed in dislodging high-ranking males from their consortships, and this strategy is more effective in larger groups [104, 126]. Further, females may prefer lower-ranking males, who are usually older and have been resident for longer periods. While a female can't prevent a male from consorting with her, she can subtly influence the success of the consortship if she chooses not to cooperate with him as he tried to remain close to her, groom her, and mount her.

The size of baboon groups is amazingly variable from less than 10 to almost 200 [2, 6, 7]. Different kinds of baboons that live in very different habitats tend to differ in group size. But even within a population such as Amboseli, group size differs at different time periods and even among groups at any one time. Habitats richer in food resources tend to support larger groups, and if groups get somewhat large for a particular habitat [108], they will often 'fission' or split. These fissions tend to be along lines of genetic relatedness and 'friendship', and usually seem to be driven by decisions of females. Fissioning can leave a group more vulnerable to predators, however, so to some extent group size may represent a compromise between food availability and predator risk, a balance that may differ among habitats, even within one population and also that may shift over time.

For a wide range of primate species, the number of mature or fertile females in a group is a major determinant of how many adult males will be in the group. In Amboseli, males tend to leave groups if they have had low mating success and to join ones with a relatively low ratio of adult males to females. But some males who have fathered a number of infants in a group stay in that group for a considerable period after they are reproductively successful; this may result in benefits for their immature offspring. Much is left to be learned about the determinants of size in primate groups despite this being a topic with a long and active history [124, 138].